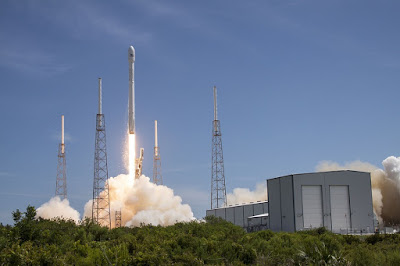 Penning a historic chapter in the history of US space programme, SpaceX on Saturday(30 May) sent two NASA astronauts to the International Space Station (ISS) onboard the reusable Falcon 9 rocket.

The SpaceX Crew Dragon spacecraft bearing NASA astronauts Robert Behnken and Douglas Hurley was on its way to the orbiting laboratory in the space and had safely reached orbit, NASA stated in a statement.
It is the first time that astronauts have been sent into space from the US soil since 2011.
It is also the first time that US astronauts have been sent into space by a private company, signalling an end to the US reliance on the Russian space technology.

After successfully taking off, Behnken and Hurley will be welcomed aboard station and will become members of the Expedition 63 crew, and will perform tests on Crew Dragon in addition to conducting research and other tasks with the space station crew.
Initially, NASA and SpaceX postponed historic launch of two astronauts to space from NASA’s Kennedy Space Center in Florida on Wednesday due to bad weather.
Technology