A mockery of social distancing in Bihar

Posted by Rebel Minds on August 30, 2020
In order to check the surging number of COVID-19 cases in Bihar, the government has imposed lockdown in the state. In simple terms "Lockdown" is defined as restricted access to institutions for security measures. Students are not allowed to attain their schools, many religious and commercial institutions are closed down in order to reduce the gathering of masses and eventually preventing people from coming in close contact with one another so that the spread of contagious diseases like corona can be controlled. Bihar is one of those states in India where medical facilities are not at all competent enough to facilitate an effective service which could prevent people from dying of disease like "CORONA". It is the same state where government hospitals are flooded with rainwater every year and the patients who are admitted in these government hospitals are prone to develop many fatal diseases in such hospitals' premises. Further, lack of medical infrastructure and proper support from the government it is very difficult to fight with corona situation in the state. Although we boast Bihar to be a state which produces enormous civil servants like (IAS/IPS/IRS/IFS officials) and competent politicians the majority population of the state lacks both academic literacy and basic civic sense. 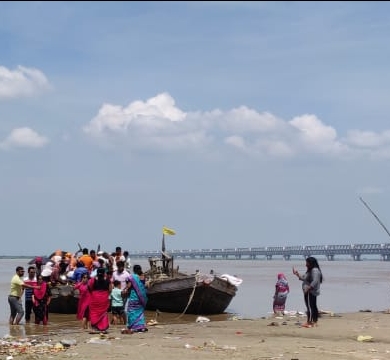 Image Source: Aditya Photography
The above image illustrates the plight of Bihar even after 74 years of independence of the country. In the present pandemic situation, most parts of the world are taking precautions by wearing masks and maintaining social distancing, however, the boat in the above image which is overloaded by people ready to sail speaks a different story. In this boat even if only one person is affected by corona this could easily lead to the spread of the virus among others and eventually, it can result in community transfer.
Under what circumstances these people are willing to take such risks? Is it the financial issue that forces people to migrate by using the cheap mode of transport and that too without any precaution? Is it the lack of civic sense? Is it the failure of the local authority who is not competent to enforce strict rules against such people who are not only violating lockdown rules but also risking their lives in danger by not maintaining social distancing. Enormous organizations are working day and night to control the corona cases in Bihar, however, the activities in the image suggest that strict and immediate actions are needed to check the careless behavior of people which could lead to fatal consequences.
News