Marhaura(also written as Marhowrah) is a town and an administrative sub-divisional area in Saran district in the Indian state of Bihar, at a distance of just 76kms from the state capital of Patna. The history of Marhowrah dates back to the Vedic period as the two famous temples situated here have references in sacred Hindu scriptures.
It was in this very town, that the once-famous Morton Toffee Factory was established in 1929 by C&E Morton Ltd during the British era.

Till 30 odd years ago, Morton was a global brand, its toffees, chocolates, and cookies were famous in every household around the state and country. C&E Morton from England was one of the principal suppliers of canned food to the British forces during the First World War and even the Polar expeditions led by Shackleton and Scott. Morton's overseas expansion plans brought the company to India.
Subsequently, its Indian arm, C&E Morton (India) Limited, started manufacturing various kinds of confectionery at the Marhowrah factory and sold the products under the trade name "Morton" almost nine decades ago.
Morton's success worked as a magnet for other companies to invest in Marhahua. Rivers flowing nearby meant good water availability. Sugarcane cultivation was promoted and in the 1920s, Cawnpore Sugar Factory (a Kanpur-based company, it's mill was the first sugar mill in India, established in 1904 in Saran) set a base next to Morton. The company expanded by setting up its own power plant, procured a steam engine from England and 20 bogies to ferry sugarcane, branched out to set up a distillery. Soon, Saran engineering works was set up next to the sugar mill.
This Saran Engineering Works, set up in the 1930s, supplied machinery as far as Russia & the UK. Many of the sugar mills and other factories received their equipment from Saran engineering.
All this resulted in Marhahua becoming a major industrial town of Bihar providing employment to a lot of people. 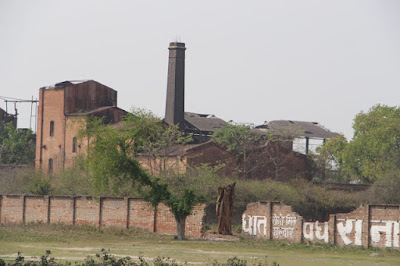 Unfortunately, as has been the case with almost all the industries of Bihar, all 4 factories of Marhaura i.e. Cawnpore Sugar Works Limited, Morton Confectionery [C&E Morton (India) Limited, a producer of milk products and confectionery], Saran Distillery, and Saran Engineering Works were shut down in the late 1990s. More than 2000 workers of Saran Engineering works and 500 workers of Morton Toffee Factory were laid off. All in all these four industrial units employed more than 4,000 and brought livelihood indirectly to lakhs. And we(at least the Biharis) all know that Marhowrah story is replicated all over Bihar.
A resident of Marhaura, Dr. NK Singh said the sugar factory was run under the Ministry of Textile long ago. The recession in the sugar industry caused its closure.
“There were three main reasons for the closure of the sugar mill: one, all the mills of the British India Corporation (BIC) were taken over by the textile ministry, which had nothing to do with sugar production; two, the pollution department closed the distillery factory due to technical reasons, which was the source of the sugar mill’s revenue; three, the crushing capacity of the sugar mill was not increased with time,” he explained.
Whatever the reasons maybe, we believe it is not justifiable that factories after factories in a state had been shut down and nothing has been done to solve the issues of the sufferes.
Even Chief Minister Nitish Kumar-led government’s promise to revitalize Marhaura mills and open new ones is biting dust.
Knowledge